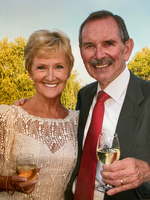 An American Story; A Lifetime of Service to Others

William Henry "Bill" Thomas passed away on May 1, 2020. His beloved wife of 61 years, Anita V. Thomas, passed away May 7, 2020, being reunited after only six days apart. Both died of Corona virus.

Anita and Bill Thomas were pillars in their family and the Northport community. Bill was born to Walter Thomas, a World War II veteran, and Hilda Musselwhite Thomas, and was a life-long resident of Northport, New York. Anita was born to Anne and Eugene Vettel in the small town of Laubenheim, Germany, near Mainz on the Rhine River. She emigrated to America in 1949 along with her sister, Kate Miller, who survives her. Anita and Bill are also survived by their two children, Katherine Thomas Williamson and her husband, Gene Williamson of Miller Place, New York, and Peter William Thomas and his wife, Beth Thomas, of Chevy Chase, Maryland. They have six grandsons ages 29 to 17, including Brian, Bobby, and Bradley Williamson and Jeff, Andrew and Teddy Thomas. Bill's older brother, Robert Thomas, a doctor of veterinary medicine, preceded him in death.

Born in 1937, Bill grew up on Laurel Avenue, spent summers at Crab Meadow, and attended Northport public schools. He took pride in maintaining his first cars, a dark green 1941 Ford Convertible with a rumble seat and a 1957 Chevy two-door hard top convertible, also in green. He attended the University of Alabama in the mid- to late 1950's during racial integration and completed his degree at the State University of New York (SUNY) at Cortland.

Anita was born in Germany in 1939 and lived through the horror of World War II.  At four years old, Anita nearly died of diphtheria and double pneumonia, having been read last rites twice in the town wine cellar they used as a shelter during Allied bombing raids.  After emigrating by ship as soon as a lottery would allow, her family put down roots in Northport, Long Island, and bought the local sweet shop and luncheonette known as the “Midway,” (currently next to Rita’s Restaurant on Main Street).

When the Midway ran out of lunch meat, Anita was sent across the street to Betcher's Butcher Shop (currently the Flower Basket on Laurel Avenue) where a young Bill Thomas also worked after school. When Anita was not leading Northport High School band as the majorette, she and Bill would exchange glances late in the day as Anita rolled up the Midway's awning and Bill would burn the trash in the back of Betcher's. They married in 1959 while Anita was still at SUNY Oneonta. After graduation, they returned to Northport and had three children, Katherine, Peter, and Eric, each two years apart. They purchased their home on Crown Hill Road in Northport in 1965 and still own the property.

Tragedy struck in 1974 when the entire family was involved in a car accident in Canada while on summer vacation. Peter lost his legs below the knees and Eric (age 8) did not survive. With the help of Anita's sister Kate, who lived in Denver, Peter was flown to Craig Rehabilitation Hospital in Colorado, a world-renowned rehabilitation center while the family lived with Kate and her three boys, Ted, Paul, and Dan Miller. Peter learned to walk again on artificial legs and returned to his fifth grade class at Ocean Avenue Elementary School.

The loss of their youngest child deeply wounded Anita and Bill throughout their lives and shook their faith for a time, but to their credit, they never let it show. Anita was always the most positive person in the room with Bill steadfast by her side. What easily could have driven the family apart brought them closer together than ever.

Bill taught middle school science and health in the South Huntington School District for 33 years and served as Teacher's Union President for over a decade. During this time, he returned to school to obtain his Masters' degree in Education. He retired at age 55. For much of the past few decades, he spent hours tending to his lawn, his garden, and his pool. He balanced his check book with the precision of a forensic accountant and supported all of the volunteer projects Anita initiated. He lived about the most honest and decent life a person can live.

Anita had a profound interest in helping children with disabilities to achieve their potential. She earned a Master's Degree in Special Education and went to work for years in the Half Hollow Hills School District, teaching K-6 special education. It was the highlight of her professional life to impact the lives of young children with learning disabilities.

When she retired, Anita and Bill focused almost exclusively on charity work. Anita joined the Northport Rotary Club and was awarded Rotarian of the Year in 2016-2017. Bill was her faithful partner in Rotary activities and became an Honorary Rotarian. Anita heard of a program called "Soles4Souls" that helped low income people in developing nations to obtain donated used shoes. Anita brought this program to Northport. She enlisted Bill to help (it was not an option) and grew the program from collecting 500 pairs in the first year to over 21,000 pairs of used shoes in 2018 alone. She demonstrated such drive and enthusiasm that many in Northport refer to Anita as "The Shoe Lady." Bill and Anita also opened their home throughout the years to host children and their parents from Haiti who traveled to New York City to undergo donated heart surgery.

Anita loved to sing, out loud, in front of people, and grew up in a time when other people would actually join in. Kathy and Peter remember this as the most embarrassing part of childhood and now remember it among their most cherished memories. Anita played guitar and volunteered at the Huntington Art League for years. She dried and pressed wildflowers and preserved them in clear resin. She knitted blankets and hats for every grandchild and others. She refinished wooden furniture from scratch. Anita was a prolific photographer and catalogued her family's life in dozens of albums to be passed down through the generations. Bill contributed by researching and publishing an extensive family tree of the Thomas/Musselwhite side of the family, well before computer apps made this commonplace.

Anita and Bill were avid runners and founding members of the Northport Road Runners. Anita ran 26 marathons including the New York City Marathon and Marine Corps Marathon several times. She even qualified for the Boston Marathon in 1983, Peter's freshman year at Boston College, and paused atop "Heartbreak Hill" while Peter and his roommates toasted to her success and cheered her on to the finish.

Bill and Anita loved to travel the world, taking many trips over the years to Anita's hometown of Laubenheim, Germany where she enjoyed large gatherings of family and friends made during her childhood. They went on cruises to Greece, Alaska, and, in their 55th year of marriage, Bill surprised Anita with a once-in-a-lifetime trip to the South Pacific, including Fiji, Bora Bora, and other exotic destinations. Not bad for a couple of school teachers.

Anita and Bill loved to entertain with good friends, good food and drink, especially gin and tonics and Grand Marnier. Anita was an accomplished cook and baker. Always homemade, her dishes were inspired by her mother's German recipes including the best apple cake ("Apfel Kuchen") ever made. She baked German "stolen" every Christmas, perfected Baked Alaskan pie, Brandy Alexander pie, and something with an almond layer of crunchy deliciousness that cannot even be described. Anita included her German parents ("Mutti" and "Papa") in every social gathering she hosted, including bridge night, and at the end of their lives, her parent's best friends, and Anita and Bill's best friends, were one and the same.

If you knew Anita, you got a personal note from Anita, usually with a picture she took of you or your child pasted on top of a generic card. The inscription would have been heartfelt, impeccably written in script, usually in fountain pen, and often accompanied by a formal note on personal stationery within the card or note itself.

Visitors to Bill and Anita's home were always welcome and greeted with a smile. They were generally regarded as one of the nicest, most caring, and generous couples in town. These traits were passed down to their daughter, Kathy, and her husband Gene, who remained in constant contact with Anita and Bill, especially in their later years. Not a day went by without multiple phone calls or invitations to spend the weekend at Kathy's home in Miller Place. Not a holiday went by without a celebration led by Kathy, their devoted daughter, and her family.

As public school teachers, Bill and Anita made a modest living by most accounts. But Bill bought some stock one year in the 1980's that skyrocketed and he sold it all at its peak. Anita, living through the experience of WWII, thought they were not worthy of such an undeserved windfall, so they created a charitable trust as a memorial to their son, Eric. Upon their passing, this trust will be distributed to programs across Long Island that help children with disabilities. They just don't make people like Anita and Bill Thomas anymore…

FUNERAL CAR PROCESSION: Due to the risk of infection during the pandemic, no public wake, funeral or Catholic mass will be possible to memorialize the lives of Anita and Bill Thomas. However, a funeral procession is scheduled for Wednesday May 13th at 12 noon starting at Nolan Funeral Home on Laurel Avenue and ending at Northport Rural Cemetery. All are invited to participate in honoring this life-long Northport couple. A celebration of Anita and Bill's lives will be planned for the future.

REMEMBRANCES: The Thomas Family encourages everyone to submit a favorite story, remembrance, or farewell wish to Anita and Bill Thomas, which will be compiled into a book for the family. Please click on the following link to submit your story: thomasfamilymemories.fromabirdie.com/contribute.