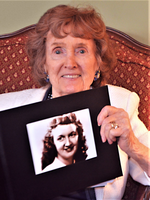 Melia, Margaret Mary - On Nov. 1, 2020, of Centerport, NY, 91 years of age. Margaret (née Luskey) was born on Feb. 10, 1929, to George and Margaret (Murphy) Luskey on the family farm in Tyrone Township in Le Sueur County, MN. She was raised in Le Sueur and graduated from Le Sueur High School in 1946. She secured a standard teaching certificate in 1949 and taught elementary education in one-room schoolhouses over the next five years in Scott County, Spring Valley, Mahtomedi, Belle Plaine and Fairmont, Minnesota. All the while she was accumulating credits each summer until she eventually earned a bachelor's degree in 1954 from Mankato (MN) State Teachers College.

In 1955, she applied for an overseas teaching opportunity with the U.S. Armed Forces and was accepted. She was offered her choice of placements; she could either teach children of U.S. Air Force personnel in Morocco, or U.S. Army service members' kids in Germany. She chose Kitzingen, Germany, and arrived in the summer of '55, and soon met Thomas R. Melia, a fellow teacher and the love of her life. They married in 1956 and soon started a family. They had four sons overseas (Thomas, Timothy, Patrick and Terrence) and then moved back to the U.S. and landed in Boston, MA, in 1963. A year later, they had their only daughter (Kathleen "Kay").

Margaret stopped teaching to raise the five children and then resumed her career in 1976. After moving from Boston to Stratford, CT, and eventually to Huntington, NY, she earned her certification in Special Education from Hofstra University and began working with children with learning disabilities in the Connetquot Central School District in Bohemia, NY, where she taught until retirement in 1994. A devout Catholic, avid bowler, golfer and competitive bridge player, and diehard fan of TV's "Wheel of Fortune," Margaret loved to travel throughout the U.S. and see her extended family as much as she could.

She was preceded in death by her parents, her husband Tom in 1989, her daughter Kay in 2019, and four of her six siblings: Georgianna Johnson, Thomas Luskey, Edward Luskey and Anne Schmidt.

In lieu of flowers, contributions to your local chapter of the American Cancer Society would be appreciated in Margaret's memory.