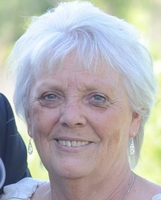 On Saturday, January 2, 2021, Virginia Ann McBride, passed away at the age of 73. Virginia joined the McBride family on March 10th, 1947 in Northport, NY to parents Ethel McBride and Henry (Harry) McBride and her sibling Robert McBride . Virginia graduated from Northport High School in 1965. Virginia held several jobs in her life and it was her time as a custodian for the Northport-East Northport School District that allowed her to live her best life in retirement. Virginia had some surprise adventures in her life. She attended Woodstock and later in life decided to retire to Oak Island, NC. It was in Oak Island that she really found herself and lived her best life. She was active in the Oak Island Sea Turtle Protection Program. She would nest sit every season and she loved spending time with her "Turtle Girls". She bought a customized golf cart with a radio and would drive around Oak Island with Ian and Laurie to go to the beach or drive to visit friends. Virginia was very supportive of ADAPT Community Network and would spend the year knitting around 150+ hats for pre-schoolers with special needs in New York City. She would also donate children's coats and other items needed every year. Virginia was preceded in death by her father, Henry McBride, her mother, Ethel McBride, and her brother Robert McBride. Virginia is survived by her sons Michael and Timothy, daughter-in-law Mariette, and the remaining members of the McBride family. In lieu of flowers please consider donating to the Oak Island Sea Turtle Protection Program (https://okiseaturtle.org/donate/)