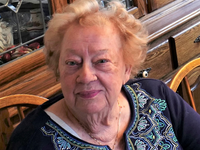 Rosaline Caryl Searight of Northport on November 1, 2021, in her 92nd year.

Beloved wife of the late Gordon Macdonald “Mac”, and survived by her three loving sons; Howard, Craig, and Thomas (Dianne).  Adored by her three grandchildren Brian, Lauren, and Molly.  “Rolly” came from Pittsburgh, PA, during the Great Depression to Northport, where her family found stability and made a life since 1938.  Always upbeat, and supportive of family and her many friends, she enjoyed life to the end.  She was a lover of animals, particularly her Golden Retriever dogs.  She was a skilled player of Bridge and played frequently up into her 90s.  She claimed that one of her Bridge secrets was to “bet aggressively, it’s only a game”.Rolly had a deep appreciation for the beauty and quality of life that the village of Northport offered.  She lived in the same home that she and her husband bought in 1953, up until her last days.  Services will be conducted at a future date.