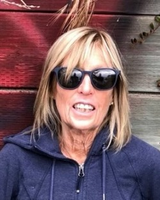 Theresa Lucille Lucas, resident of Northport, NY, passed peacefully on September 2, 2022 after a brief illness at the age of 81. Terry graduated from SUNY Stonybrook and eventually earned her Masters Degree in Education. Although a teacher by trade, Terry was most well known for her achievements as a chef and caterer. She was not classically trained but her creativity and passion for cooking was present in each one of her dishes. She began cooking for the masses at home for her family and went on to become the Executive Chef at Melville Hall, USMMA. After leaving USMMA, Terry began her own catering business where she has been a staple in the community for the past 30 years. She brought artistry to all of her recipes, most notably her Gingerbread replicas of Victorian homes and Christmas Cookies. Her favorite "customers" were friends and family who always had a special request when visiting and Mom always obliged. Everyone was welcome at Mom's table. In addition to cooking, Terry was an avid runner and exercise enthusiast. She was a member of Gold's Gym where she enjoyed classes and community. By far, her favorite activity was running and in more recent days walking. She could be found almost every day for the last 40 years at Sunken Meadow State Park making her way up to the golf course, winding her way through the wooded trails, or enjoying the sunshine and water from the boardwalk. Born in the summer, she was a true sun goddess and nothing made her happier than a few hours out by the pool or sitting on the beach. Although Terry had many independent interests and hobbies her proudest accomplishment in life was her family. Terry was born to George and Lucille Sotak on June 20, 1941 in Jamaica, New York. She is survived by Michael, her husband of 59 years, six children and their spouses Amanda and Todd Mentuck of Swampcott, MA, Carolyn and Robert Thall of Northport, NY, David Lucas and Patrick Tesh of Seattle, WA, Nancy and Jaime Scott of Port Washington, NY, Rachel Lucas and Giuseppe Donadio of Seattle, WA, and Susan Lucas and RJ Sweeney of Seattle, WA, nine grandchildren, Courtney, Megan, Patrick, Tommy, Ryan, Anna, Nico, Olivia and Rocco along with Great Grandchildren Gunnar and Rocky. She also leaves behind a sister Carol Schwartzott and her dear cousin Lollie Stancati. Her creative spirit and love for education inspired her children to become educators, artists and designers. She was cherished and will be forever missed. A celebration of life will be held in November of 2022. We will honor her memory by enjoying one last gathering with friends and family.