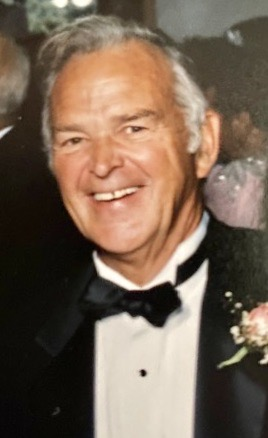 We always said Charlie had 9 lives as he overcame many medical events over the years, including polio. These lives came to an end on August 31st at the age of 93.

Charlie was a caring, loving husband, father, grandfather and great grandfather. Honoring his flag and Country, he served in the Marine Corps. He was a lifeguard at Lido Beach, a volunteer fireman at Eatons Neck and on the tournament team at Merrick Fire Department. He kept active, walking from Penn Station to his job at NY Tel where he worked his way up from climbing poles to that of Sales & Marketing Manager. He was President of the Property Owners, Eatons Neck Association, & Knollwood Beach Association, Commodore and one of the founders of Eatons Light Yacht Club, Fleet Captain at Northport Yacht Club, and at his final home on Shelter Island, Trustee of the Hay Beach Association, volunteer for the Shelter Island Historic Society and preservation of Taylor's Island.

Inactivity was not part of his DNA and his innovative ideas could be seen in his layout design of their house in Shoreham Village and the one on Shelter Island, both of which he acted as General Contractor. He enjoyed golf and sailing, but with limited free time, chose sailing. Luckily, his enthusiasm for that wasn't in competition with his love for his wife as she too is an avid sailor. His love for the sea and boating was passed on and enjoyed by his children and grandchildren. He sailed right up until he was 82.

He's left a hole in our hearts and we know he'll have a sailboat with the compass leading him to God's heavenly seas where fair winds and following seas await him.

A Memorial Service and a Celebration of Life Reception will be held at the Northport Yacht Club, Bluff Point Rd. Northport, NY 11768 on Saturday, October 8th from 12-4 PM. The services including some words or songs by family members, military honors and a prayer will take place between 12-1 PM with the celebration of Charlie's life following. An RSVP to Linda Puls (seapulse@optonline.net) would be appreciated if you intend to participate in the Reception. Donations may be made in Charlie's name to Tunnel to Towers Foundation or Sail to Prevail.

Share Your Memory of
Charles
Upload Your Memory View All Memories
Be the first to upload a memory!
Share A Memory