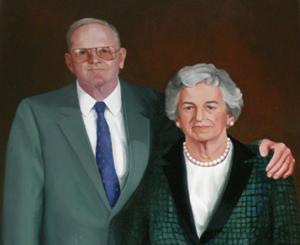 Below you will find the history of our building and our founders. The Funeral Home has three viewing rooms that range in size to accommodate any and all needs. We have a separate children’s playroom, and are handicapped accessible. We encourage anybody to stop in and see our beautiful building.

Nolan Funeral Home was founded in 1948 by James P. Nolan, Sr. and his wife Anne T. Nolan. Jim and Anne met at Kings Park Hospital where they were both registered nurses. Jim left nursing to attend American Academy Institute of Funeral Service where he earned his Funeral Directing License. Jim completed his residency at Clayton Funeral Home in Kings Park in 1947.

Jim and Anne ventured to open their own Funeral Home in Northport. A new building was erected and opened for business in October, 1948. They steadily built their business through hard work, and a determined mind, to give families the best service possible. Business did so well that they added-on to the original building in 1958. A year later their eldest son Jim, Jr. began working at the Funeral Home full time, and was followed by his brother Peter in 1963. The building underwent another expansion in 1968, to how it stands today.

It was in July of 1982, that the sign in front was changed to Nolan & Taylor-Howe. Taylor-Howe was a local funeral business with a history of its own.

In November of 1963 Harold Howe, a Funeral Director from Freeport, moved to Northport and started working for Mr. Taylor. In June of 1968, he purchased the business from Mr. Taylor. While running the funeral home, he was a member of the Northport Fire Department serving as Department Treasurer from 1972 through 2002. Harold also served as a Scoutmaster, Treasurer for the Northport Historical Society, and a Mason for over 50 years. His longest community commitment was with the Northport Rotary Club which he joined in 1964, served as President in 1972 and remained active until his death in 2014.

Harold ran the business until 1981, when he merged with Nolan Funeral Home. On July 1, 1982 the Nolan & Taylor-Howe Funeral Home began its business at 5 Laurel Avenue.