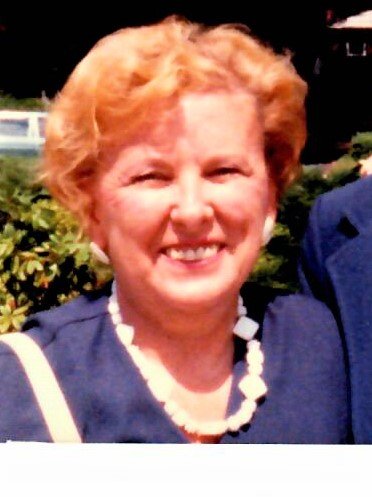 Doris was born to Mary Ellen Brannock and Daniel Stack Hubbard in New York City. She grew up in Astoria, Queens, attending William C. Bryant High School. She later moved to a three story brownstone in Jackson Heights, NY.  After she married Ed in 1956 they moved out on Long Island to Fort Salonga and lived in the house that Ed designed and where she passed away. She spent many childhood summers with her extended family in Cambridge, Maryland, the scene of  the colorful stories she shared about the Hubbard side of her family. An only child, Doris was close to her Hubbard cousins Barbara Hook and Norma Lee Abbale (predeceased). Into their later years, they roared with laughter about the antics in Cambridge.

Always passionate about people, Doris attended St. John’s University and then graduated from New York University with a degree in social work. Later on, she went on to receive her Master’s degree in Social Work from Adelphi University. After her youngest, Christy, was born Doris went back to work, first at the Kings Park Psychiatric Center. She went on to work at the Family Service League in Glen Cove, NY, and then found her dream job as a school social worker at Norwood Elementary School in Northport, where she worked until her retirement.

Doris was vivacious, vibrant and full of life. She was intelligent, independent minded and a staunch believer in women’s equality. She was wise, friendly to everyone and drew people to her with her warm smile. She loved to laugh and to make others laugh and was a wonderful storyteller. Doris enjoyed conversations beyond the superficial, often speaking about the spiritual world, quantum physics (before it was part of pop culture), and the light that surrounds us all. She could often be found reading, either fiction or a good self-help book, and kept journals for years. Books were a source of comfort to her until the end, when she would say, “I’m good from the nose up.” Doris played the piano and enjoyed gathering the family in the living room to sing. She was a theatre aficionado, especially Broadway plays.

Doris adored visiting new places and she and Ed had many adventures traveling the world when they retired. They traveled to China, Australia, South America, Europe, and Alaska. They took numerous cruises with their friends and family. Doris loved a good party and emceed the annual Marina Isles’ St. Patrick’s Day party in Englewood, FL where she and Ed spent their winters. She called Florida her “Shangri-La” and swam every day in the pool there, basking in the hot tub, and playing cards at the pool house. She was known for her inspirational messages as she said Grace before the community dinners. She loved to dance and was never shy on the dance floor, kicking her heels up for a good time. Doris always wanted to look her best, put make-up on every day and loved to dress up. She wore heels until she could no longer walk in them.

She and Ed spent their summers in Wells, Vermont where the extended family gathered at Lake St. Catherine. Her favorite times were when everyone was together—her husband, children and grandchildren. Always game for a round of Uno with the grandchildren, she loved babies and regaled them with the nursery song, “Where is pointer?” She was famous for talking to her children and students about “warm fuzzies” and “cold pricklies” from Transactional Analysis. Doris took the extended family on a Caribbean cruise that her children and grandchildren loved, and followed that with a Thanksgiving vacation for all to Walt Disney World another year. Her generosity was evident to all who loved her. She never forgot to send a birthday or anniversary card.

Doris was a believer in facing her fears. Although she was afraid of water, she learned to swim as an adult and even went on a white-water river rafting trip where she tumbled overboard. That was the first and only time her head went underwater. She was strong and brave.

Doris was very involved in the United Methodist Church in East Northport and later attended Unity services. She cared more about the message and her ministers than the name of the church. She maintained a close relationship with Pastor Clayton Z. Miller until her death. Doris always believed there was another dimension beyond this world and was passionate about her own spiritual and personal growth. She attended workshops with her church family, had a long-standing “cottage group” of women she met with regularly, and went to various seminars at Omega Institute in Rhinebeck, NY. Doris never held a grudge and was quick to forgive, no matter the circumstances.

Doris was truly a “people person” and brought love, laughter and light to all who knew her. She will be terribly missed by her husband Ed, her family, friends, and the larger community. We are all grateful to Ed for his devotion and loving care for her. We wish you well, Doris, on your next journey, and send you off with love and light. We’ll see you in the next world.

Share Your Memory of
Doris
Upload Your Memory View All Memories
Be the first to upload a memory!