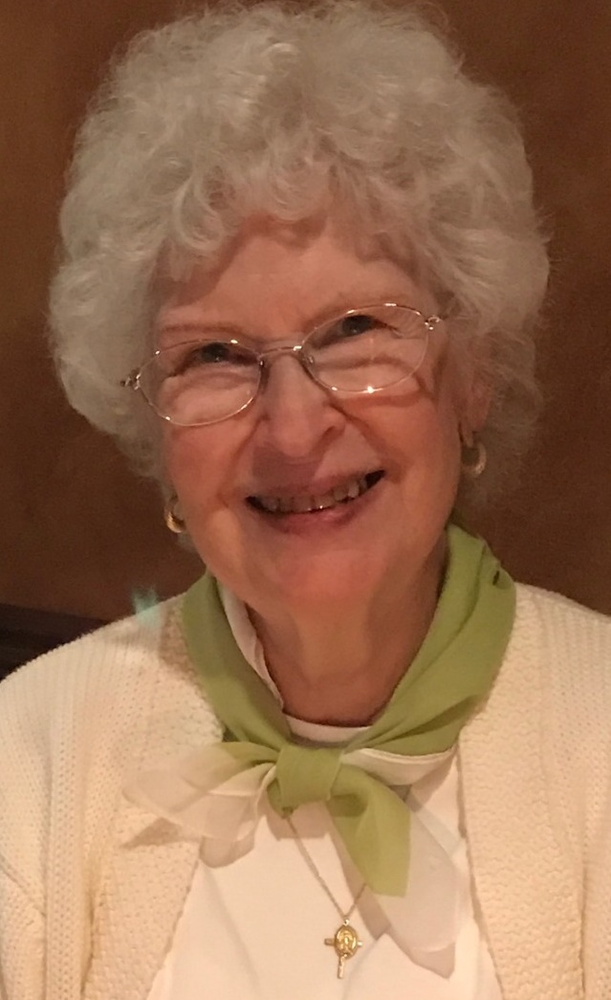 Mary A. Marco passed from this life on March 1, 2021, at the age of 89.  She was a resident of St. Joseph's Home in Huntington, where she was devotedly cared for by the Missionary Sisters of St. Benedict for seven and a half years.

Born Mary Arlene DeSimone on October 3, 1931 to Michael and Margaret (Collins) DeSimone, Mary was raised in Astoria, Queens.  Having lost her mother at the tender age of seven and a half, her widowed father was assisted in her upbringing by her grandmother, Annie Eager Collins.  Her father's cousins provided a loving respite from the summer heat each year in Connecticut.  Mary was married in 1950 at the age of 18 to E.P. Marco at Immaculate Conception Church in Astoria.  She worked for several years for Bell Telephone.  In 1955, they welcomed their first child, Lisa Ann.  In 1959, they moved into a 3 bedroom ranch in Huntington which they designed themselves.  In 1962, they were blessed with the arrival of Angela Marie, and in 1964, with Richard Michael.

Mary soon developed a passion for civic and political involvement, spanning a period of 50 years.  Mary met her lifelong friend, Mary Nash, with whom she worked very closely on many projects.  She was part of the Building Committees and PTAs of Manor Plains, Elwood Jr. High and John Glenn High schools.  She worked on budget committees. She was an officer of the Suffolk County Conservative Party and the Elwood Conservative Club.  "A record of proven civic leadership," accurately stated her campaign brochure during her bid for Suffolk County legislature in 1974.  Her participation in the Town of Huntington Town Hall Task Force (1976-77) saw the conversion of the Simpson JHS to the new Town Hall.  She was also an avid poll watcher.

During these busy years, the importance of Mary's Catholic faith was evident in the enrollment of her younger children in parochial schools, participation in St. Francis of Assissi fundraising events and teaching confraternity classes.  She also gave generously of her time to Right To Life and other organizations in support of women in crisis pregnancies.

In 1971, Mary invited her dear grandmother to come live with the family.  In 1977, after a forced relocation to Buffalo, NY for two years due to employment concerns, the family returned to the area, this time finding a home on Oleander Drive in Northport.  Her marriage ended in 1984.  Two years prior, Mary began working at the Suffolk County Medical Examiner's Office in Hauppauge.  She enjoyed her work and the camaraderie of her wonderful co-workers for 14 years.  She retired from the ME's office in 1996.

In 1999, Mary moved into a cozy second floor co-op at Nathan Hale Apartments in Huntington Village ("my little nest"), where another group of lovely friendships awaited her.  During this time, Mary's involvement in political and civic issues waned and she devoted her time to other things that she really loved such as letter writing (her email address was "sojourner scribe"), reading and sharing poetry and prose, attending events at the Huntington Library and Senior Center, and organizing her Irish and Italian family histories.   The women she befriended at Nathan Hale were like a family to her; they enjoyed dinners and movies, pooltime and birthdays, and looked after one another in times of need.  Above all, Mary used this time to further develop her spiritual life.  Now a parishioner of St. Patrick's Church, Mary attended daily Mass as well as devotions and retreats at various area parishes.  She forged many friendships with the other worshippers she met at these events. Her desk and bureau drawers were full of rosaries, scapulars, holy water and holy cards from the numerous wakes she attended, as well as evidence of her support of many charities.  She also volunteered her time at Trocaire, the St. Patrick's outreach service.

In 2014, after falling in her home, Mary was invited to live at St. Joseph's Home on Cuba Hill Road.  This was a very familiar place to her, from having attended talks and retreats over the years.  The care and compassion shown her by the Sisters was beyond compare, and Mary found a true home in this loving environment.  She continued to grow in spirit with the benefit of daily Mass and devotions until her passing.  The Sisters and other residents frequently remarked, "Mary is always smiling."

In addition to her kindness and generosity, Mary possessed an uncompromising courage of her convictions.  She was resourceful, courageous and persistent.  Mary loved a good joke, singing along to the radio, writing poetry in greeting cards, quoting Ira Gershwin lyrics, enjoying an occasional scotch and water while toasting, "Here's looking at you, kid," collecting angels, holding new babies, shopping at the Southdown General Store, savoring Bark Thins with almonds, collecting dead insects for her grandchildren's collections, imitating the way Art Carney brushed off the paper when preparing to sign his name, and celebrating St. Patrick's Day at Miller Ridge Inn with Mary Nash and Bunny Beyer.

Mary leaves behind her children; Lisa Hollywood and husband Daniel of Manhattan, Angela Marco of Roseboro, NC, and Richard Marco of Florence, Italy; her grandson, Nicholas Tate, granddaughter Mary Tate, granddaughter Katherine Glynn and husband William, and a great-granddaughter, Addy Bowlin.  She also leaves behind her beloved friend Mary Nash, a goddaughter, Mrs. Alanna Verlie, and a cousin, Ms. Sandi Martin.  Her half brother, Arthur DeSimone, predeceased her in 2014.

Visitation will be held on Friday, March 19th, from 1-5 PM at Nolan's Funeral Home, 5 Laurel Road, Northport.  A Mass of the Resurrection will be celebrated on Saturday, March 20th at 10:15 AM, with burial following at Calvary Cemetery in Woodside, Queens.

Due to the current health crisis and travel restrictions, the family understands that some may prefer to post their respects on this website.  If anyone would like to express their thoughts to Mary in writing, these messages can be sent to Nolan's and will be included with the special things we are sending off with her.  Lastly, in lieu of flowers, the family is requesting a donation to the Sisters of St. Benedict at St. Joseph's Home, 350 Cuba Hill Road, Huntington, NY 11743.  Please include a note that your donation is in memory of Mary Marco.  Thank you.

Share Your Memory of
Mary
Upload Your Memory View All Memories
Be the first to upload a memory!