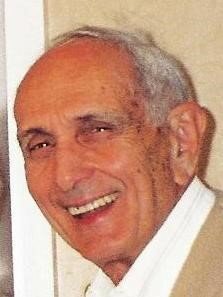 Joe was born in Brooklyn on November 6, 1921 as the first and only child of Ralph and Carmela Merenda. The family moved to the clean air of upstate New York when Carmela contracted tuberculosis while he was a toddler. He attended a one-room schoolhouse in Monticello. They returned to New York City after Carmela's death in 1931.

After their return they lived with his maternal grandmother in Brooklyn and in nearby Ozone Park in Queens. Joe attended John Adams High School. After graduation he settled in a job at a print shop in downtown Brooklyn.

Joe worked in the print shop until he was drafted by the army in late 1942. His basic training was conducted at Fort Jackson in South Carolina. He remained at Fort Jackson as an instructor until he was deployed to Europe in late 1944 as part of the large force and a member of the 100th Infantry Division that invaded Germany. Three weeks before Germany's surrender, Joe was seriously injured on Good Friday by shrapnel form German anti-tank artillery. He was treated at a hospital in England as the war in Europe ended. After his recovery he served in the occupation of Germany until his discharge in early 1946.

After the war, Joe returned to his job at the print shop. Soon after, a young woman from Minnesota was hired to work in the office. She only worked there for a short time but a romance blossomed and Joe married Erma Aschenbrener on June 16, 1949 at her hometown in central Minnesota.

After their marriage they returned to New York and soon purchased a home in Bellerose, Queens. They would raise a family consisting of 4 children in that house and lived there for 59 years until their relocation to Northport in 2009.

In 1950 Joe was hired as a police officer for the NYPD. He served with the NYPD for 32 years until his retirement in 1982. The bulk of his time was spent at the 107th precinct in Fresh Meadows, Queens.

After his retirement, Joe and Erma traveled extensively, visiting her large famly that was scattered throughout the USA. They toured Europe and visited Australia where they stayed on a ranch. They also spent time at the family cottage in the Catskills. Joe loved the outdoors, gardening, hunting and fishing.

Joe is predeceased by his loving wife, Erma who passed away in 2011 after 62 years of marriage. He is survived by his four children, Joseph Jr. (Patricia), Stephen (Jeanne), Thomas, and Nancy. He is the cherished grandfather of Sarah Jean (Jonathan) Self, Kaitlin (Dan'yell) Mackey and Matthew (Antoinette) Merenda. He is the devoted great grandfather of Logan, Claire, Eli, Caroline, Juliette, Micha, Giannah & Charlotte.

Donations to VNS Hospice, 505 Main Street, Northport, NY 11768, in his memory, would be appreciated. www.visitingnurseservice.org

Share Your Memory of
Joseph
Upload Your Memory View All Memories
Be the first to upload a memory!
Share A Memory