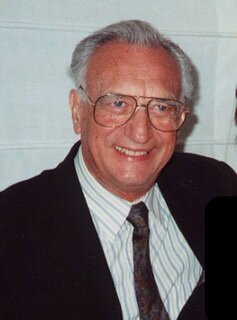 Vito Dante Agosta passed away peacefully in his 100th year on New Year's Day 2023 amid his friends and family at his home in Huntington, Long Island. He was pre-deceased by his wife Mary of 66 years, and survived by his three children, John, Diana, and Charles and by his six grandchildren, Nellie, Elyza, Nicolo, Isabella, Alexander, and Leonardo.

Vito was born in "Little Italy" in Manhattan to Giovanni Agosta and Elizabeth Alvares and grew up in Bensonhurst, Brooklyn. His studies at City College were interrupted when he enlisted during WWII in the Army. Following honorable discharge he completed his engineering degree at then Brooklyn Polytechnic, followed by a Masters at University of Michigan and a Doctorate at Columbia. He accepted a faculty appointment at his alma-mater, "Poly" where he taught Thermodynamics for his career.

In his research he consulted for the U.S. Air Force, JPL, and The Apollo Mission at NASA. More recently he founded a company for his patents for combustion of renewable alternate fuels.

His wake will be held at Nolan Funeral Home, 5 Laurel Avenue Northport, starting at 3pm until evening on Sunday January 8th. We will celebrate his life on Monday January 9th at 11AM, at Mass at Our Lady Queen of Martyrs, 53 Prospect Rd, Centerport, followed by burial at Saint Patrick's Cemetery, Huntington and a reception at 42 Cherry Lane.

Vito - May the face of the Lord shine upon you!

Share Your Memory of
Vito
Upload Your Memory View All Memories
Be the first to upload a memory!
Share A Memory