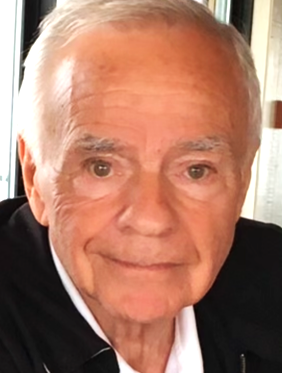 John Macfie, 91, of Centerport, passed away at Huntington Hospital on Friday, January 14th, his mother's birthday. He is dearly loved and missed.

John was born on November 8th, 1930 in Brooklyn, New York, the son of John D. and Isabella (Scott) Macfie. He was proudly one of ten brothers and sisters: Rita, Nora, Vera, Lillian, Winnie, Jean, David, Conrad, and Franklin.

John was an avid baseball player, and played with several future major leaguers. He fondly recounted his days growing up with friends and attending the High School of Commerce in New York City. After graduation, John enlisted in the United States Army. He loved his country and was very proud of his years of service.

John was an ambitious, hard-working man who built two highly successful photography businesses in New York City: Colorite Film Inc. and International Stock Photography Ltd. He was proud of these businesses and especially its staff, whom he considered a second family. John frequently recounted memories of his career: from the early days of taking pictures of the New York Rangers and falling asleep on NYC subways in-between shifts to the later years of growing his businesses and traveling internationally. Personally and professionally, John saw the beauty in life and captured it dynamically in both his photography work and later in retirement through his colorful paintings and artwork.

While he loved music and the arts, John's greatest passions were his family and friends. John is survived by his wife, Mickey; four children: Donna (John) Millo, John (Kristie) Macfie, Megan Macfie (Artis Miner), and Jeremy (Rebecca) Macfie; nine grandchildren: Nikol, Cody, Deanne, John, Charlotte, Eleanor, Isla, Weston and Hendrix; and many other family members and friends whom he held near and dear to his heart.

Memorial contributions may be made to Huntington Hospital or Alzheimer's Association.

"Grieve Not… Nor Speak of Me with Tears… but Laugh and Talk of Me as though I Were Beside You. I Loved You So… 'Twas Heaven Here with You."